Ealing Mead County School opened in 1962 with its first intake of pupils coming mainly from two of the smaller and much older secondary education schools in the area, Little Ealing (1905-1962) and Drayton Green (1908-1962). Both of these schools then ceased providing secondary education in 1962 but continued with the teaching of primary school age children through to the present day.

Ealing Mead County School was very much a purpose built centre for modern education with facilities such as a state of the art gymnasium equipped for a variety of sports including basketball, two well appointed science labs, a technical drawing room, a geography room, two metalwork rooms and forge, a woodwork room, an art studio, a music room, a good size library and a canteen kitchen adjacent to a light and airy large school hall fitted with modern stage lighting and audio system.

The classrooms were similarly much brighter and more pleasant than many of the older schools in the borough, and were fitted out with modern furniture and the latest green chalk boards (instead of blackboards) including some that consisted of a wide, continuous rubber belt that travelled vertically allowing the teacher more space to write. 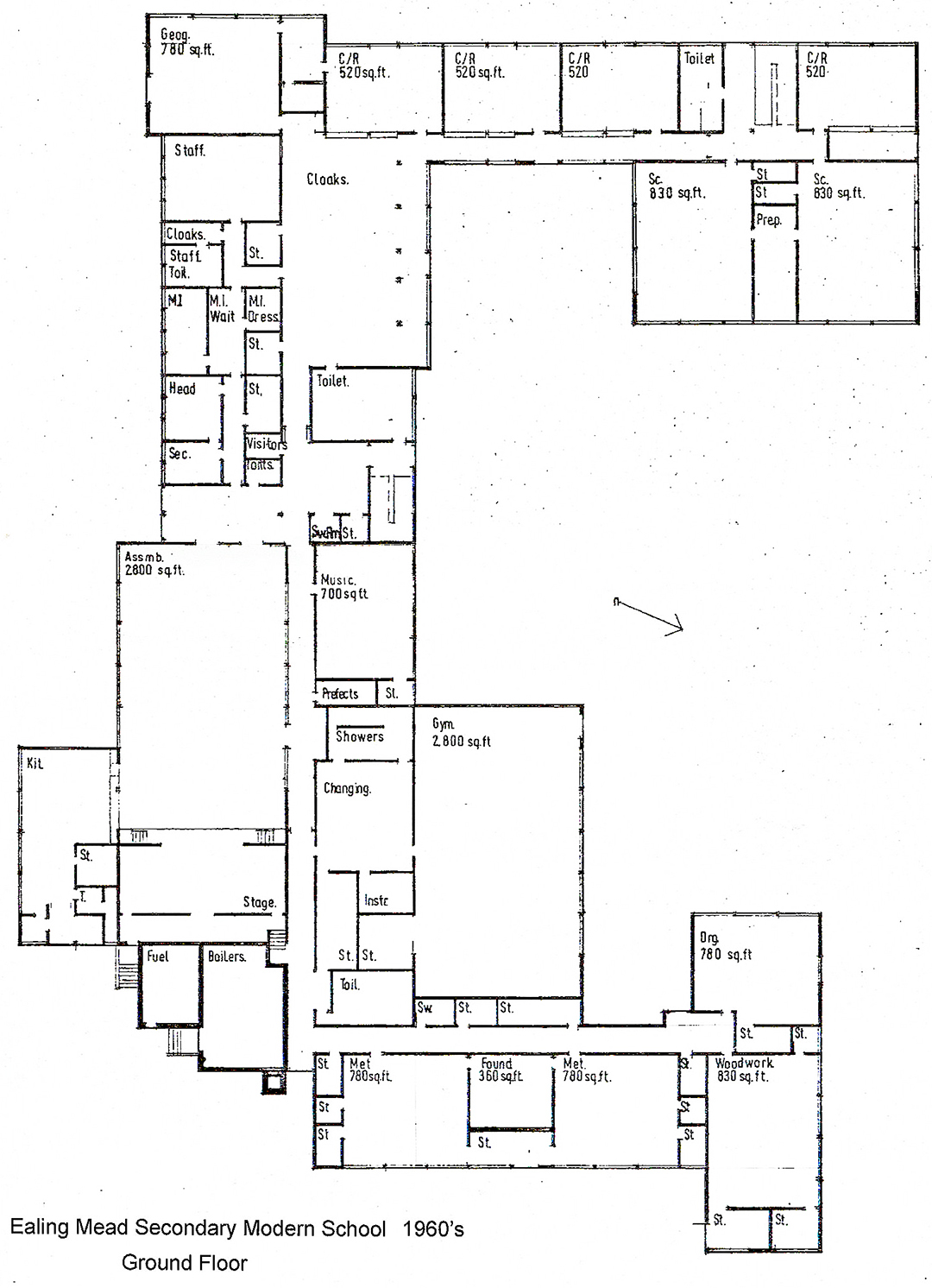 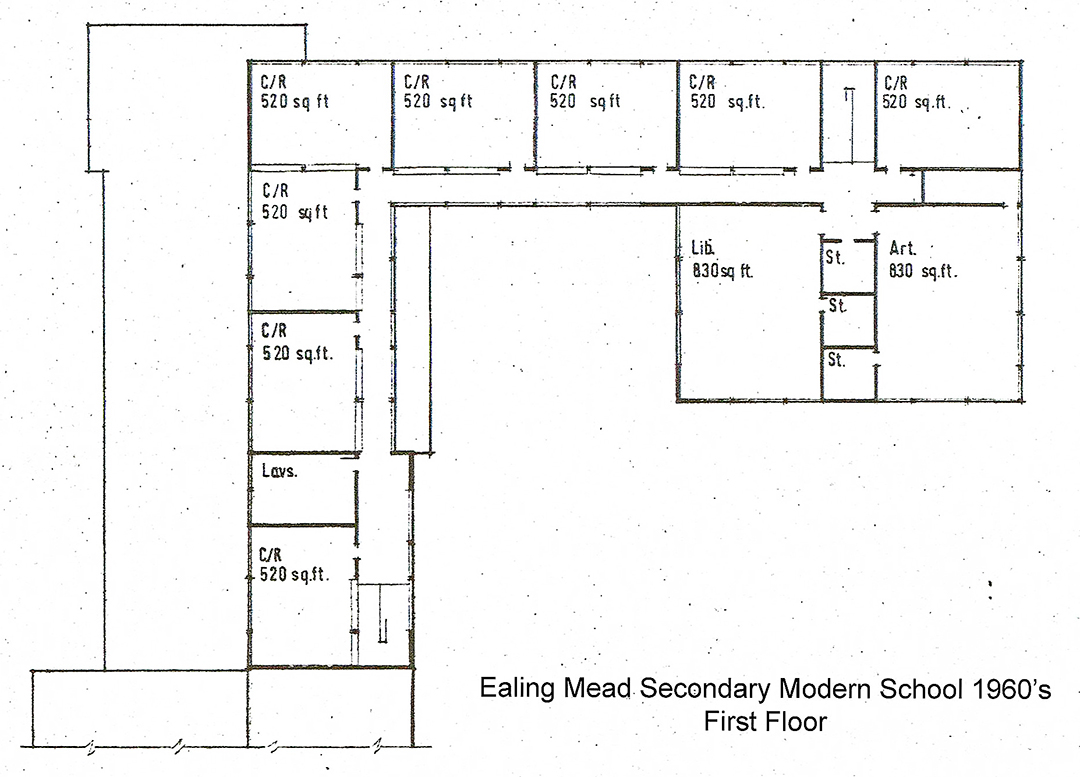 Externally, there was a large tarmac playground bordered to the north by a grass area that led up to a chain-link fence alongside London Underground’s Piccadilly railway. Running the length of the eastern side of the playground was a tall brick wall, to the left of which was a locked gate that led into Popefield Playing Field where athletics, football, cricket and schools sports days took place. The school Tuck Shop opened onto an external paved area close to the playground tucked into a space between the gymnasium wall and the technical drawing classroom. Also in the grounds, on the lawn not far from the main entrance, there was a pond and a weather station. Along the western, Willow Road, boundary of the school stood long, open sided bicycle shelters that contained enough stands for a few hundred cycles. The school caretaker’s house at number 79 Almond Avenue is now the only building from that time that still exists. 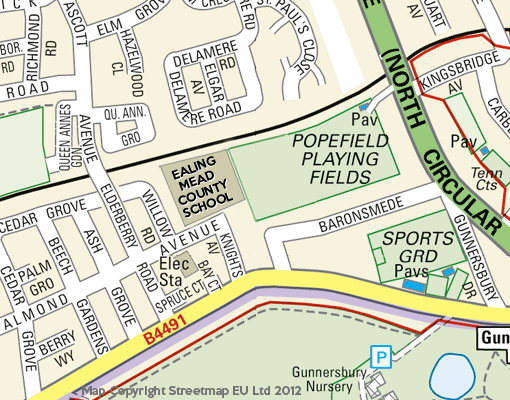 Ealing Gazette
Tests carried out on the roof of Ealing Mead Secondary School have shown that it is safe,  even though high alumina cement was used in its construction.
In spite of the outcome of the tests, however, Ealing Education Committee has recommended that a further £15,000 be spent on investigations before the roof is declared safe.
The committee, at Thursday’s meeting at the Town Hall, also discussed the overcrowding problems caused by the closure of the school during the investigations.
The General Services sub-committee is to report to the full committee on the possibility of selling an alternative site to the Archdiocese of Westminster Schools Commission in order to overcome the accommodation problem at Rothchild Middle School and the general lack of school places caused by the Ealing Mead situation.

The following is an excerpt from Hansard, 9th May 1975:

Sir George Young, (Con) MP for Ealing and Acton
“I wish to raise two points. The first deals with who pays for the structural alterations to the schools and other buildings owned by local authorities, and who will bear the loan charges and other costs which may have to be written off if those buildings can no longer be used in the way in which they were originally intended.

In my own constituency, Ealing Mead School can no longer be used as a school because of structural defects, and provision has had to be made to accommodate the schoolchildren elsewhere. It is intolerable that the ratepayers in Ealing, who are reeling from the 63 per cent. increase in rates, should have to bear unaided the cost of remedying the structural defects which arose through no fault of their own and which are a national rather than a local problem.”

No financial solution was forthcoming from central government, therefore, Ealing Council had no option other than to sell-off the land to a property developer, which resulted in Ealing Mead County School being demolished and its pupils dispersed to other already overcrowded schools across the borough. 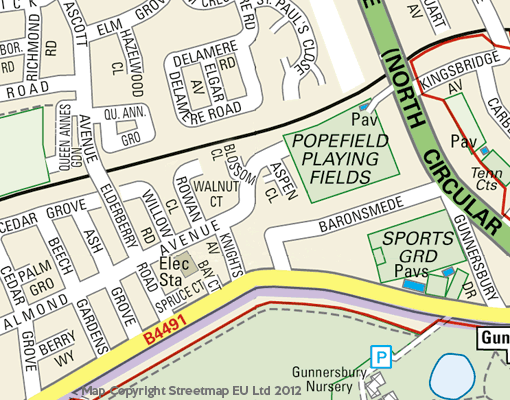 Area after new housing development. Note that Popefield Playing Fields has somewhat decreased in size and has subsequently degenerated into rough scrubland unsuitable for sports. It is also frequently used as a dumping ground for unwanted household refuse.